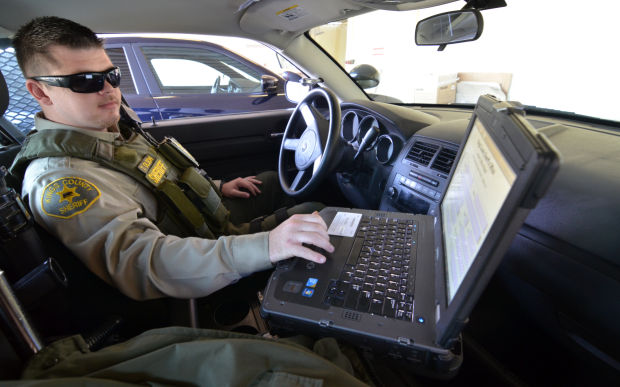 HANFORD — The Kings County Sheriff’s Office on Tuesday rolled out its new computer-aided dispatch system, a long-overdue upgrade bringing their software into the 21st Century.

Proponents say this will help keep deputies on the streets and create new ways for citizens to stay informed about what’s happening in the community.

“It’s been a long process and there were many hurdles to overcome, but we’re very excited about moving forward,” Sheriff Dave Robinson said.

The Sheriff’s Office has been using an aging, green-screen interface since the early 1990s. All commands had to be keyed in manually. It didn’t use Microsoft Windows. In fact, it didn’t even work with a mouse.

“If you look at where technology is today, we’re miles ahead of where we were even a few years ago, not to mention when the old system was first built,” Robinson said. “This brings us up to speed with the technology we all use in our daily lives.”

So officials sought out Spillman Technologies, Inc. — a Utah-based software developer with customers in 1,000 law enforcement agencies across the country.

The Kings County Board of Supervisors voted last year to sign a contract with the developer, which would cost the Sheriff’s Office only $10,000 a year more than they were spending to maintain the existing database.

Since then, Spillman Technologies has been training county staff and laying the groundwork for this week’s switch.

“Integration has gone smoothly,” Robinson said. “Spillman has met all its milestones going forward and they will have staff assisting us onsite for the next three weeks.”

Assistant Sheriff Dave Putnam, who oversaw the transition, said the public shouldn’t notice any difference in service during the rollout.

“So far, everything has gone smoothly,” Putnam said. “This will make our jobs a lot easier and allow us to better serve the community.”

Officials are looking forward to the final phase: installing the new software at the Kings County Jail. Robinson says they want to get the jail systems upgraded to Spillman software in the next six months.

Robinson also hopes to open up a web portal in the coming months where citizens can log in and download crime trends and statistical reports about their neighborhoods.

“We’re cautiously optimistic that it will work out well,” Robinson said. “Time will tell.”

The county previously attempted an upgrade in 2008. They signed a contract with SMART Public Safety Software, Inc. and paid them $500,000.

The Sheriff’s Office canned it and went back to their old software, but the Kings County police departments who also signed up for SMART were stuck using it for years.

That fiasco is one of the reasons why Robinson and the Sheriff’s Office waited so long to decide on a new system.

“This has been a great joint effort by county staff, our IT department, Spillman Technologies and Assistant Sheriff Putnam,” Robinson said. “They’ve all done an outstanding job with the encouragement and support from our board of supervisors. We’re very excited to take the next step.”